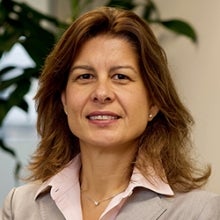 Ceyla Pazarbasioglu is Director of the Strategy, Policy, and Review Department (SPR) of the IMF. In this capacity, she leads the work on the IMF’s strategic direction and the design, implementation, and evaluation of Fund policies. She also oversees the IMF’s interactions with international bodies, such as the G20 and United Nations.

Ceyla Pazarbasioglu is Director of the Strategy, Policy, and Review Department (SPR) of the IMF. In this capacity, she leads the work on the IMF’s strategic direction and the design, implementation, and evaluation of Fund policies. She also oversees the IMF’s interactions with international bodies, such as the G20 and United Nations.

Prior to her current position, Ms. Pazarbasioglu served at the World Bank Group (WBG) from 2015–2020, most recently as the Vice President for Equitable Growth, Finance, and Institutions. She oversaw a portfolio of nearly $30 billion of operational and policy work and advisory engagements in the WBG Global Practices of Finance, Competitiveness, and Innovation; Macroeconomics, Trade, and Investment; Governance; and Poverty and Equity. She also had management responsibility for more than 2,200 staff in 138 countries, including 30 fragile and conflict-affected states.

Ms. Pazarbasioglu also worked on policy and country issues during two previous tenures at the IMF (1992–1998 and 2003–2015). She served as Deputy Director in the Monetary and Capital Markets Department, in charge of the work on financial sector regulation and supervision and crisis management. She also worked as Assistant Director in the European Department and was the mission chief for Ukraine. Before that, she led the Emerging Markets chapters of the Global Financial Stability Report and worked on financial sector policies and restructuring, including in Argentina, Russia, and Uruguay. Prior to 1998, she focused on structural reforms after crises in the Nordic countries, Emerging Europe, Latin America, Turkey as well as in Korea and Thailand.

Ms. Pazarbasioglu, a Turkish national, joined the Government of Turkey crisis management team in 2001 to focus on reforming the pension system, establishing the inflation targeting regime, and implementing the “voluntary” debt swap. She was then appointed as the Vice President of the Banking Regulation and Supervision Agency of Turkey. As a high-level government official, she worked closely with the Central Bank and the Treasury, with banking sector representatives as well as with the government to contain and resolve the crisis and to establish a credible regulatory and supervisory authority.

During 1998–2001, Ms. Pazarbasioglu served as the Chief Economist of Emerging European Markets at ABN AMRO Investment Bank in London.

She holds a doctorate in economics and finance from Georgetown University and studied at Princeton University (visiting scholar). She is a certified Securities and Financial Derivates Representative (from the U.K.). She has published on financial crises; banking and corporate sector restructuring; regulatory reforms; macro-financial analysis; and debt management.

@CeylaP_IMF
Receive updates about upcoming events!
Past Events featuring Ceyla Pazarbasioglu
A Shock Like No Other: The Way Forward For Developing Economies
Are Robots Coming for Your Job?
Ending the Shell Game: A New Global Norm for Beneficial Ownership Transparency
2019 Nobel Prize Winners in Economics Present: Good Economics for Hard Times
Raising the Bar: What Works to Reduce Poverty and Spur Growth
The Global Commission on Adaptation: Report Launch and Discussion