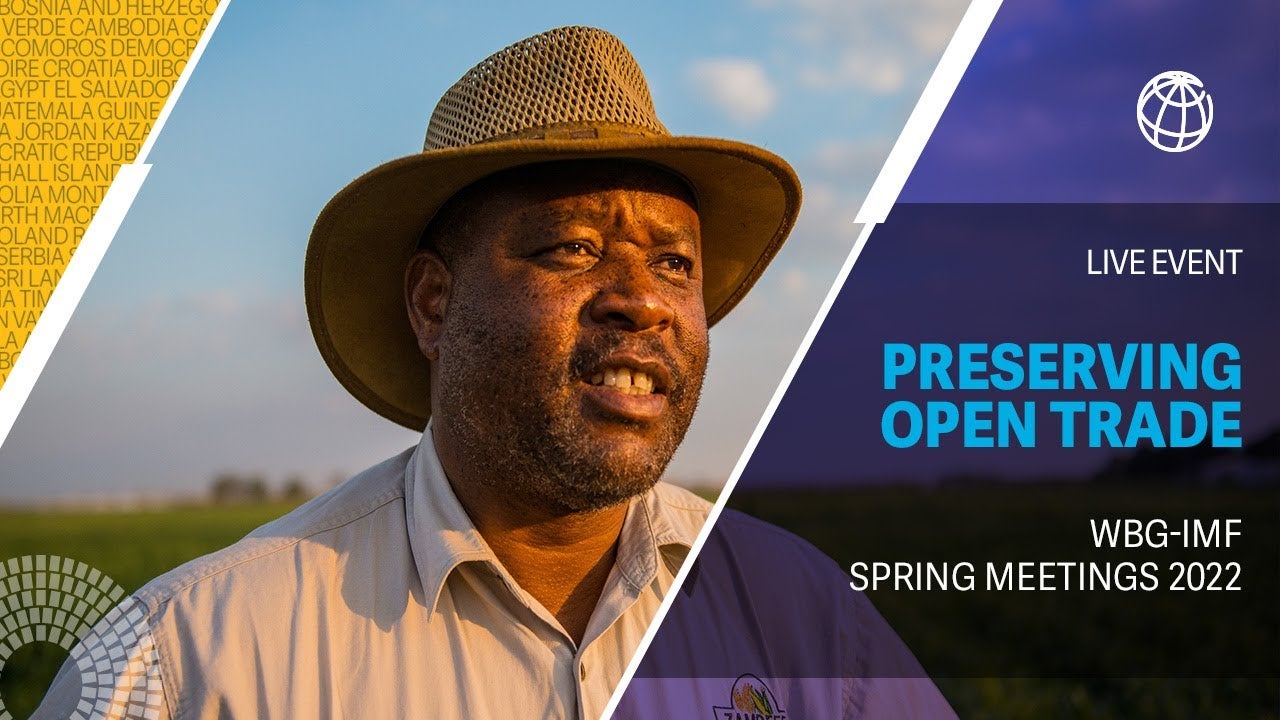 At a time when the global economy is coping with multiple shocks, including the pandemic, the Russian invasion of Ukraine and supply chain disruptions to food and other goods, governments are increasingly turning to subsidies for relief. But the costs can be very high, in terms of public spending and distorted incentives for investment and consumption. In this event, the heads of the four key global economic policy institutions—the World Bank Group, the IMF, the OECD and the WTO—discuss the importance of trade and global cooperation for overcoming current challenges and implications of subsidies for markets and poor countries. They call for more transparency and proactive measures to reduce their harm, especially for the largest and most distortive subsidies.

00:00 Welcome! WBG Spring Meetings 2022 | Preserving Open Trade
02:37 Main findings of the report Subsidies, Trade, and International Cooperation
07:58 The end of an era of globalization? Challenges of today's world
12:06 Where we are landing now: Globalization, development, and trade
14:13 National self-interest vs. globalization
17:18 Visions from the World Trade Organization
19:45 Enlightened self-interest
21:24 Measurement of agricultural subsidies
22:52 Greater industrial policy and subsidies in areas like semiconductors
26:01 Subsidy and economic policy in a crisis mode
29:39 Tackling subsidies: Politically expedient vs sensible things
33:51 Market distortions between the rich and poor wold
37:51 Lessons learnt from the vaccine experience
39:27 Access to information
40:39 Persistence of current shocks in the next years
41:44 What comes next?
43:16 The next shock on the horizon
45:26 Closure of the conversation

“Trade is a positive force for commerce and trading is a cornerstone for development. We need to address the largest and costliest subsidies distorting trade.”

“It is important to avoid energy stockpiling as energy underpins fertilizer and food production.”

Trading for Development in the Age of Global Value Chains
When Countries Trade, Women Win

Trade, poverty and inequality
How Africa can shape the 21st century trade agenda Torie Smith (Moderator) Welcome everyone! My name is Torie Smith, and joining me on the live-chat to answer your questions is Vicky Chemutai, an economist with the World Bank’s Macroeconomics, Trade and Investment Global Practice.

The event will begin soon. Please stay tuned and submit your questions here on World Bank Live. You can also follow the discussion on social media using #UnleashTrade.

Trade remains an important source of growth and could contribute much more to solutions for the greatest global challenges of our time. Listed on this page you can see the speakers participating in today’s conversation on the role of subsidies, trade, and international cooperation in building a resilient future.

While we wait for the event to start, learn more about subsidies, trade, and international cooperation by exploring a new report jointly published by the World Bank, IMF, OECD, and WTO: thedocs.worldbank.org

Vicky Chemutai / World Bank Research shows that estimates of the effects of fossil fuel subsidies, for example, suggest opportunities for governments to better target scarce fiscal resources toward the most vulnerable households without undermining climate efforts. Countries should also be focused on how government financing can incentivize climate-friendly projects while discouraging climate-unfriendly projects. Globally, governments are currently under pressure to cease export financing for fossil-fuel related infrastructure while doing more for renewables and other green business.

AKINRADEWO A.M.OROBOLA Thank you all, happy Friday. WBG, Thank you.

Camilo Rivera What about initiatives like carbon border adjustments, or tariffs intended to make production greener in third countries? not coordinates inititatives, like these, could distort world markets even further.

Vicky Chemutai / World Bank Thanks Camilo. We address the issue of carbon border adjustments and its potential impacts in this report: openknowledge.worldbank.org

Fundacion Comunitaria Zona Azul The food quality from transnational we get in the rural areas is not only bad and dangerous - but also very expensive - Here in CR a very high percentage of earning are spent buying food. I think that working at local level, community level, can take care of the quality of food people eat, food would be more accessible money wise, and jobs can be created by empowering the rural communities the right way. Subsidies should go to the people who make the wheel go around - not to the ones who pay others to do the job of making the industrial wheel go around. Our world is made up of millions of small people with no say - And subsidies are given to the minorities who are damaging people's health and the natural environment. A second look into the past is necessary. Necessary to acknowledge what became right and what went wrong within humanity.

Sara Subsidies are often used as a way to response to some social inequalities or inequal redistributive effects. Can you explain why subsidies are not the best way to proceed?

Vicky Chemutai / World Bank Subsidies can have detrimental effects internally (such as in undermining evenhanded domestic competition), on other trading partners (especially in developing countries), on the global economy, or on the environment. The costs of subsidy-induced distortions can be substantial, especially when the goods being subsidized are already over-produced because of negative externalities. In the agricultural sector, they skew the playing field for farmers especially in terms of pricing output.

Michael Which report are they referring to?

Torie Smith (Moderator) They are referring to a new report jointly produced by the World Bank, IMF, OECD, and WTO. The report is available here: thedocs.worldbank.org

Thierno Bocar Diop Should green payments and agri-environmental subsidies, that are proven to provide little additionality in terms of environment, be consider a distortion to agricultural productivity and competitiveness?

Vicky Chemutai / World Bank Thank you Thierno! Despite the longstanding mandate to establish a “fair and market-oriented agricultural trading system” while taking into account non-trade concerns like the environment, agreement on most issues remains elusive. This includes efforts to establish concrete modalities for the reduction/incorporation of domestic support entitlements, such as the ones you raise. Additionally, addressing climate change requires greater effort to understand the environmental impacts of existing subsidies across all sectors and the priorities for reform. Equally important will be the design of any new subsidies to support the transition to net-zero carbon emissions (e.g., to minimize spillovers). As the report stresses, greater cooperation will be critical in improving our understanding of the distortionary nature of these subsidies.

AKINRADEWO A.M.OROBOLA Welcome DR Ngozi Okonjo-Iweala, Director-General, World Trade Organization. Thanks for giving a sustainable presentation on trade and international cooperation in building a resilient future. World Bank Group thanks for bringing us the best speakers who can address key points, that can make us build better and stronger in diversity, grow and develop in various economic aspects to unleash trade.

Vicky Chemutai / World Bank Under all efforts of international cooperation on trade, there are flexibilities that are often incorporated to take into account the needs of developing country members, especially least developed country (LDC) members. For example, negotiations on subsidies recognize the role of subsidies in relation to many development programs, and thus incorporate aspects like subsidy phase-out plans. Check out the report for more!

Caiphas Chekwoti Subsidies are in part a consequence of powerful interest groups with strong political connections that shapes domestic policy and regulations. What would be the softer proposals (if any) that would dampen the push for subsidies?

Vicky Chemutai / World Bank Thank you Caiphas! From a global perspective (which is the lens the report takes on), focus is placed on reducing subsidies that have negative effects on third parties – e.g., through trade flows, or on the environment, etc.. Indeed, the development of these subsidies is often a gray area as you allude to in your question given the heavy political-economy dynamics that could be at play. As such, whether those subsidies were implemented because of lobbying efforts or other reasons is not analyzed in this report. On the flip side, some interest groups may be calling for subsidies that are in fact desirable, such as those that reduce the use of fossil fuels. Ultimately, what may matter more is the effect of the measure rather than who was asking for it and why.

Damian G What is the role of the World Trade Organization?

Vicky Chemutai / World Bank Hello Damian! The WTO is the global trade rule-making body. In the context of today’s discussion which places emphasis on subsidies, the WTO provides a strong basis for their regulation. In particular, this is through the WTO Agreement on Subsidies and Countervailing Measures and the WTO Agreement on Agriculture, although the agenda to negotiate detailed subsidy rules for services has been largely set aside. Granted, some recent free trade agreements have also gone beyond WTO rules, containing, for instance, provisions disciplining the behavior of state-owned enterprises and more extensive lists of prohibited subsidies.

Aocaterniz How is the WTO tackling the downsides of subsidies as an injection for growth and development in developing economies?

Vicky Chemutai / World Bank Thank you Aocaterniz! In our analysis, there is a strong recognition that the current WTO rules on subsidies are not sufficient/effective in preventing subsidies with negative spill-overs to other countries.
Moreover, reform on subsidy rules could take long to conclude - today’s global trading landscape is dealing with many crises (including geopolitical) e.g., the war in Ukraine, economic instability stemming from Covid19, a blocked Appellate Body in the WTO Secretariat etc. Hopefully, progress on fishery subsidies, for example, could at least be realized sooner than later - WTO Members have yet to agree special disciplines for harmful fisheries subsidies that contribute to overfishing.
As such, the report calls for relatively small steps to improve transparency in the use of subsidies, which would at least incentivize the reduction of subsidies which have distortive effects on trade and investment.

Torie Smith (Moderator) That concludes today’s event! Thanks to everyone who participated. Please stay tuned for the event replay, which will be published on this page.

For more information about the World Bank’s work on trade, visit our website: www.worldbank.org

Listen to the 25-min summary

Use the timestamps to browse the main sections of the podcast.

About the Spring Meetings 2022 The Spring Meetings bring together leaders from government, business, international organizations, and civil society, along with a diverse group of experts, to discuss global challenges and the path ahead. Watch the replay of our events dedicated to international development.

Available with simultaneous interpretation in Arabic, French and Spanish.