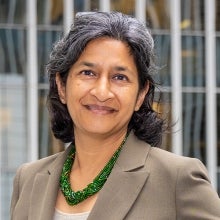 Mamta started as Vice President for Human Development at the World Bank on July 1, 2020.Read more

Mamta started as Vice President for Human Development at the World Bank on July 1, 2020. In this role she oversees the Global Practices for Education; Health, Nutrition, and Population; Gender; Social Protection and Jobs – as well as the Human Capital Project.

An economist by training, she has had technical roles in Social Protection and Labor (1996-2004) and Education (2006-10). She was Deputy Director of the World Development Report on Development and the Next Generation in 2006. During 1998-2000, Mamta was MacArthur Fellow for Poverty and Inequality at King’s College, Cambridge.

Mamta joined the World Bank as a Young Professional in 1995. She has a Bachelors’ Degree in Economics from St. Stephen’s College, University of Delhi and a D.Phil in Economics from the University of Oxford. Mamta has written extensively on poverty, demography, education, pensions, and skills and is well-known for her econometric studies on fertility in India.

@MamtaMurthi
Receive updates about upcoming events!
Upcoming Events featuring Mamta Murthi
How COVID-19 Eroded Human Capital and What to Do About It
Past Events featuring Mamta Murthi
Walking the Talk: Reimagining Primary Health Care After COVID-19
Streets for Life: Saving Lives on the Road through Safe Speeds
Preparing Countries for a Safe and Effective COVID-19 Vaccine Rollout
The Africa Human Capital Plan
Transforming Transportation 2021: Mobility For Recovery
Women Leading the Way for Change – Stories from the Frontlines