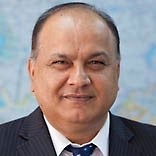 Saroj Kumar Jha is the World Bank’s Regional Director of the Mashreq Department (Lebanon, Iraq, Syria, Jordan and Iran). He assumed the position on July 1, 2017.

Saroj Kumar Jha is the World Bank’s Regional Director of the Mashreq Department (Lebanon, Iraq, Syria, Jordan and Iran). He assumed the position on July 1, 2017.

Before his appointment to the Mashreq region, Mr. Jha was the Senior Director for the Fragility, Conflict and Violence Global Practice at the World Bank Group. Earlier, Mr. Jha was the World Bank’s Regional Director for Central Asia based in Almaty. From February 2012 until January 2016, he led the Bank’s strategic engagements in Kazakhstan, Kyrgyz Republic, Tajikistan, Turkmenistan, and Uzbekistan, with particular focus on cooperative management of water and energy, and regional action on climate adaptation and mitigation.

In addition, Mr. Jha served as the Bank’s Global Manager for the Disaster Risk Management Practice and as Head of the Global Facility for Disaster Reduction and Recovery (GFDRR), which he founded in 2006.

GFDRR is now the world’s largest global fund for disaster prevention and post-disaster recovery operations. Mr. Jha, an Indian national, joined the World Bank in 2005 as a Senior Infrastructure Specialist in the Sustainable Development Network, after working for the Government of India (1990-2005) and United Nations agencies (1999-2004) as a senior executive in the field of public sector management, infrastructure financing, natural resources management, natural disaster prevention, and environmental sustainability.