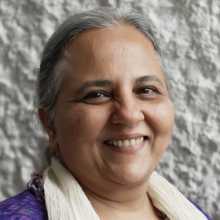 Reema Nanavaty: has been working with the Self-Employed women workers from informal sector since 1984 when she joined the Self-Employed Women’s Association (SEWA) and stayed on to be elected as its General Secretary in 1999. She expanded membership to new heights making SEWA the single largest union of informal sector workers. Her key focus has been to provide full employment & self-reliance to the 1.7 million members of SEWA. 30 years of her selfless service was honored by Padma Sri (the fourth highest civilian award in the Republic of India) by Government of India for her distinguished contribution in the area of Social Services in 2013.

She believes in empowering the poor women from informal sector by keeping them abreast with modern tools of ICT. In this context Reema heads the ICT cell of SEWA developing custom designed mobile-apps for the farm women and establishing linkages with online e-retailing platform to provide a broad global market access to the members of SEWA.

Reema is currently member of the Advisory Council on Gender of the World Bank Group. She was also invited as a member of International Labor Organization’s High Level Global Commission on Future of Work. She was the only commissioner representing the informal sector workers, self-employed workers and the rural workers union in the entire commission. She has also been invited as a member of the UN High-level Dialogue`s Technical Working Group on Energy Action to Advance Other SDGs.