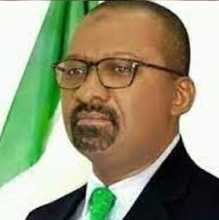 Vice President of the Republic of Sierra Leone
Latest or upcoming appearance: March 7, 2022

Dr. Mohamed Juldeh Jalloh started his professional career in the United Nations in March 2000 working as a Program Officer at the United Nations Mission in Kosovo (UNMIK).  Until recently, he worked as a Senior Advisor at the United Nations Stabilization Mission in Mali (MINUSMA). His extensive experience allowed him to provide strategic advice in overseeing the efficient functioning of the offices and pillar of the Deputy Special Representative of the Secretary-General who also served as the Resident Coordinator and Humanitarian Coordinator.

Dr. Jalloh also supported the Algerian led mediation process of the Malian crisis. While at the United Nations Office for West Africa (UNOWA) and the Sahel in Senegal, he served as the Sahel Advisor to the Special Representative of the Secretary-General of the United Nations for West Africa and the Sahel. In that capacity, he co-lead the elaboration of the United Nations Strategy on the Sahel, and worked closely with the Peace and Security architecture of ECOWAS, the African Union-led Nouakchott process and later the G5 Sahel and several international NGO’s active in security and governance issues.