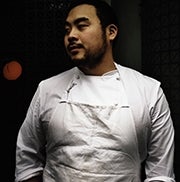 Chef and Founder, Momofuku
Date of most recent appearance: April 16, 2015

David Chang is the chef and founder of Momofuku, which includes restaurants in New York City, Sydney, and Toronto as well as a best-selling cookbook and print journal called Lucky Peach.Read more >

Since opening Noodle Bar in 2004, David has been awarded Time 100 and Fortune’s “40 Under 40” and profiled in the New Yorker, Vogue, and on the cover of Forbes Life and New York Magazine. He has been called one of “the most influential people of the 21st century” by Esquire, and one of Fast Company’s “1000 most creative people in business.” David has taken home five James Beard Foundation Awards (Rising Star Chef of the Year, Best Chef New York City, Best New Restaurant – Momofuku Ko, Outstanding Chef, Who’s Who of Food and Beverage), and Momofuku Ko has two Michelin stars, which it has retained for seven years. Momofuku Ko and Momofuku Ssäm Bar are both featured on the S.Pellegrino World's Best Restaurants list.