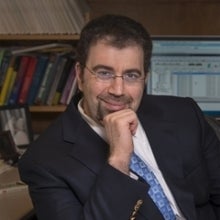 Daron Acemoglu is the Elizabeth and James Killian Professor of Economics at the Massachusetts Institute of Technology. His areas of research include political economy, economic development, human capital theory, growth theory, innovation, search theory, network economics and learning. In addition to many scholarly articles, Daron Acemoglu has published four books including Why Nations Fail: The Origins of Power, Prosperity, and Poverty (with James A. Robinson), which was a New York Times bestseller in 2012.

He has received numerous awards and fellowships, including the inaugural T. W. Shultz Prize from the University of Chicago in 2004, the inaugural Sherwin Rosen Award for outstanding contribution to labor economics in 2004, the Distinguished Science Award from the Turkish Sciences Association in 2006, and the John von Neumann Award, Rajk College, Budapest in 2007. He was the recipient of the John Bates Clark Medal in 2005, awarded every two years to the best economist in the United States under the age of 40 by the American Economic Association, and the Erwin Plein Nemmers prize awarded every two years for work of lasting significance in economics. He received a BA in economics from the University of York in 1989, a M.Sc. in mathematical economics and econometrics from the London School of Economics in 1990, and a Ph.D. in economics from the London School of Economics in 1992.