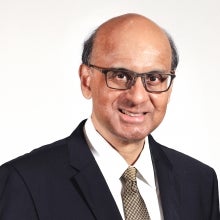 Internationally, Tharman co-chairs the Global Commission on the Economics of Water, whose recommendations will be considered in the UN Water Conference in 2023 (the first since 1977). He is also on the High-Level Advisory Board established by the UN Secretary-General that will make recommendations on Effective Multilateralism for the UN’s 2024 Summit of the Future. In addition, he chairs the board of the Group of Thirty, an independent global council of economic and financial leaders from the public and private sectors and academia.