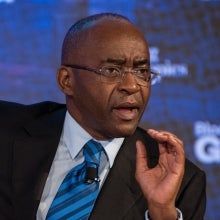 A Zimbabwean based in London, Masiyiwa serves on several international boards including Unilever Plc, Netflix, National Geographic Society, Asia Society, and the Global Advisory boards of Bank of America, the Council on Foreign Relations (in the US), Bloomberg New Economy Forum, the Prince of Wales Trust for Africa, and Stanford University. He also serves on the US Holocaust Museum Committee on Conscience, and the AU Reform Task Force.

In May 2020 Masiyiwa was appointed to serve as an African Union Special Envoy to help coordinate Africa’s private sector efforts to procure medical supplies and fight the spread of COVID-19. As Special Envoy he also heads up the Africa Vaccine Acquisition Task Team. He led a similar private sector initiative to fight Ebola in West Africa in 2014-2015.

A board member of the Rockefeller Foundation for 15 years, Masiyiwa is Chairman Emeritus of the Alliance for a Green Revolution in Africa (AGRA) and co-founder of the Generation Africa GoGettaz Agripreneur Prize. In 2019 he was awarded the Norman Borlaug World Food Prize Medallion.

As a philanthropist, Masiyiwa is a member of the Giving Pledge. In 1996 he and his wife Tsitsi cofounded what is now known as the Higherlife Foundation which has supported the education of over 250,000 orphaned, vulnerable and gifted children across Africa, as well as health, disaster relief and preparedness, and rural transformation programs.

Since 2013 Masiyiwa has devoted his time to mentoring the next generation of African entrepreneurs through his Facebook platform, which has a growing followership of 5.6+ million young people. For several years, Facebook has identified his platform as having the most engaged following of any business leader in the world.

In 2020, Masiyiwa was inducted by JA Worldwide into the Global Business Hall of Fame and named amongst Bloomberg’s 50 Most Influential People in the World, New African Magazine’s 100 Most Influential Africans and Mail & Guardian’s 100 Africans of the Year. An Honorary Fellow of the African Academy of Sciences, Masiyiwa was selected in 2014, 2017 and 2021 to Fortune Magazine’s list of the “World’s 50 Greatest Leaders”.

Masiyiwa has received honorary doctorates from Morehouse College, Yale University, Nelson Mandela University and University of Cardiff where he received his engineering training in the United Kingdom.

@_AfricanUnion
Receive updates about upcoming events!
Past Events featuring Strive Masiyiwa
Ending the Pandemic: The Road to an Inclusive Recovery