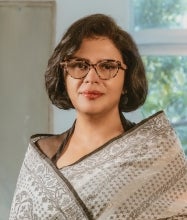 President, Bangladesh Garment Manufacturers and Exporters Association, and Managing Director, Mohammadi Group, a family business conglomerate whose journey began exporting readymade garments, and has since diversified into software, digital distribution, real estate, power generation and the group’s latest is the launch of a television channel called Nagorik. She was featured in BBC’s 100 Women. Huq won the SAARC Literary Award for her poems in 2006. Her first book of poems is titled Time of My Life. She is the former CEO of TV Southasia, a collaborative platform of South Asian electronic media based in Kolkata. She also sits on the board of trustees for the Asian University for Women.

School and Holy Cross College. Huq was married to Annisul Huq, the late Mayor of Dhaka North City Corporation. Together they have four children, and two grandchildren.