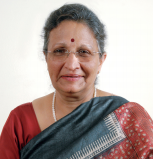 Ms. Renu Sud Karnad is the Managing Director of the Housing Development Finance Corporation, India. She holds a Master’s degree in economics from the University of Delhi and is a graduate in law from the University of Mumbai. She is a Parvin Fellow – Woodrow Wilson School of International Affairs, Princeton University. Ms.Read more >

Ms. Karnad is also a member of the Risk Management Committee and in-charge of the lending operations of the company and is responsible for spearheading HDFC's expansion. Under Ms. Karnad's leadership, HDFC has grown consistently in its lending business with cumulative home loan disbursements of over Rs 5 trillion.