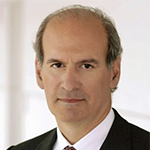 Solmssen was Siemens’ general counsel and assumed responsibility for the company’s businesses in North and South America and was best known for having negotiated simultaneous settlements of the Siemens corruption prosecutions and leading a global campaign against bribery. In October 2016, he began serving as Executive Vice President and General Counsel of AIG, heading up the global legal, compliance, and regulatory functions.