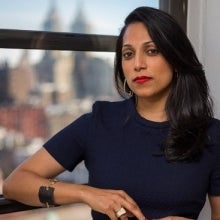 As head of the Mayor's Office for International Affairs, Penny Abeywardena leads the City's global platform for promoting its goals for a more just and accessible society, showcasing the diversity of New Yorkers and sharing policies and best practices with cities and states around the world.

As head of the Mayor's Office for International Affairs, Penny Abeywardena leads the City's global platform for promoting its goals for a more just and accessible society, showcasing the diversity of New Yorkers and sharing policies and best practices with cities and states around the world.

Since her appointment in September 2014, the International Affairs team has launched a series of initiatives focused on connecting New Yorkers and City agencies to the diplomatic community, as well as more effectively serving NYC's diplomatic corps, which is the largest in the world. Prior to joining Mayor Bill de Blasio's administration, Penny was the Director of Girls and Women Integration at the Clinton Global Initiative (CGI), a non-partisan organization that convened global leaders to devise and implement innovative solutions to the world's most pressing problems.

Penny joined CGI in 2009 and led the program's evolution into one of CGI's most successful efforts. While at CGI, Penny was responsible for the portfolio of CGI commitments focused on empowering girls and women worldwide, developing year-round programming and integrating the gender lens throughout the CGI platform. During her tenure, she advised multinational corporations, philanthropists, NGOs and multilateral institutions to increase investments in gender-focused development initiatives while expanding the community of CGI members who incorporated the gender lens in their work. Before joining CGI, Penny worked in both development and programmatic areas for Human Rights Watch, the Funding Exchange and the Drum Major Institute for Public Policy.

In 2017, Penny was named by the French American Foundation as a Young Leader. She is a World Economic Forum 2016 Young Global Leader, and a Term Member of the Council on Foreign Relations. She was a Founding Member of Lincoln Center’s Global Exchange and has previously served on the Hillary for America Policy Working Group on Global Women's Issues, the World Bank's Advisory Council on Gender and Development, and the Boards of Directors of Sakhi for South Asian Women, Global Partners, Inc., the Eastside Greenway and Park, and Resource Generation. Penny was a contributing author to Women in the Global Economy: Leading Social Change, and in 2012 was recognized by the United Nation’s Decide Now Act (DNA) Summit as one of 101 Global Innovators for her work to put women's rights on the global political agenda. She is a graduate of the University of Southern California and completed her Master of International Affairs at Columbia University's School of International and Public Affairs.