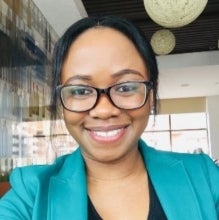 Nkechi Coker is a seasoned civic technologist passionate about leveraging data and technology to improve the way government engages and delivers services to citizens.Read more

Nkechi Coker is a seasoned civic technologist passionate about leveraging data and technology to improve the way government engages and delivers services to citizens. For the past 9 years, she has worked with national and sub-national governments, civil societies and journalists in Africa and Asia, championing open data, open governance, govtech and building data-driven communities across Africa.She currently leads the Code for Africa’s GovTech Program to transform the way government works using data and technology and has consulted for the World Bank and the Engine Room on the same cause.

Prior to this role, she helped set up and managed Code for Africa's  local open-data and civic technology laboratory in Lagos, Nigeria which has satellite teams in Abuja and Benin City, and helped kick started Nigeria's vibrant Hacks/Hackers community of civic 'hacktivists', and Africa’s first female network of data scientists and data journalists - WanaData.

Her current role and pioneering work as the head for the Edo State Government's open data initiative, where she spearheaded the establishment of Nigeria's first open government portal, has seen her recognized as a thought leader in the open data/open government space in Africa.

Nkechi is also a Mandela Washington Fellow, a member of the Global Shaper Community, Cape Town Hub and a School of Data fellow. She enjoys writing, reading and travelling in her spare time.