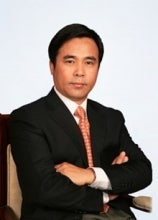 From 1987 to 2006, Mr. Liu Liange worked in the People’s Bank of China. His positions include deputy division director of the General Office, the Foreign Affairs Bureau, and the International Financial Organization Department, chief representative of Fuzhou Central Sub-branch, deputy director general of the International Department, and director general of the Anti-Money Laundering Bureau. Among those years, he also worked as alternate executive director of the Asian Development Bank for China in the Philippines (1996 – 1999), and chief representative of the People’s Bank of China Representative Office for Europe in Great Britain (1999 – 2000). He took office as vice president of the Export-Import Bank of China in 2007, and since February 2015, he is vice chairman and president of the Export-Import Bank of China.

Mr. Liu Liange is a senior economist and has a master’s degree in economics.