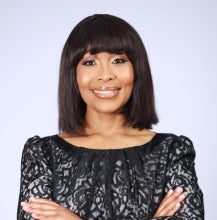 She is the co-owner of “Moon Landing Media” (pty) Ltd and proprietor of the African Leadership Dialogues series. She also hosts a daily talk show and podcast titled “PowerTalk with Lerato Mbele” at Power987 in her native South Africa.

Prior to this Lerato spent nine years as a TV presenter and broadcaster for BBC World News, hosting the main Africa-focused business shows and international documentaries for programming that linked Africa’s relationships in global trade, commerce, and international development institutions.

Lerato has also been a senior business anchor at CNBC Africa and a prime-time news anchor in her native South African Broadcast Corporation. She has worked as a foreign policy researcher and advisor, in her capacity as head of the multiparty democracy programme at the South African Institute of International Affairs and was co-editor of the book “Designing Democracy in Africa” with Ayesha Kajee.

Lerato is a Chevening Scholar with an MSc Development Studies from SOAS at the University of London. She was named a Young Global Leader in 2014 by the World Economic Forum. She has appeared on the power lists of the Oprah Magazine, NewAfrican Women, Leading Ladies in Africa, the Star Newspaper, the Mail & Guardian “On the shoulders of giants” catalogue of influential women in South Africa. She’s also a former member of council and board for the University of Cape Town, ranked Africa’s best institute of higher learning.