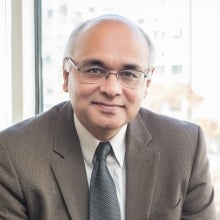 Junaid, a Bangladeshi national, was formerly the Chief of Staff to World Bank Group President Jim Yong Kim. He joined the World Bank in 1991 as a Young Professional and worked on infrastructure development in Africa and Eastern Europe. He has since held several management positions, leading the Bank’s program in diverse regions including Africa, the Middle East and North Africa, as well as in India and South Asia.

Prior to joining the President’s office in January 2016, Junaid was the Senior Director for the Water Global Practice, a position he held since the creation of the Global Practices in July 2014. In this role, Junaid has built a strong and collaborative Global Practice and has brought a strong track record of management and leadership in the area of service delivery and international partnerships, combining intellectual and analytical rigor with strategic operational focus. Junaid has championed the Practice’s focus on water and the economy, and emphasized institutions and resilience in water management.

Junaid spent 10 years in the field, first as the Deputy Resident Representative and Principal Economist in Johannesburg, and then as Regional Team Leader of the Water and Sanitation Program in New Delhi. In 2004, he was a team member of the World Development Report (WDR): Making Services Work for Poor People. From 2004-2008, he was the Sector Manager for Social Development in South Asia Region and subsequently for Urban Water & Sanitation before taking on the latter responsibility for the Africa Region in 2010. He was also the Director for Sustainable Development in the Middle East and North Africa Region, a position he held from 2012-2014.