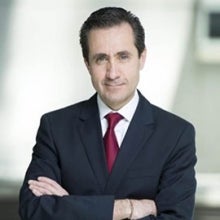 As of May 1st, 2014, Mexican-born Jorge Familiar is the Vice President of the World Bank for Latin America and the Caribbean.

As of May 1st, 2014, Mexican-born Jorge Familiar is the Vice President of the World Bank for Latin America and the Caribbean.

He is the first Latin American to be appointed to that position in the last 30 years. Eradicating poverty and boosting shared prosperity through the creation of opportunities for all Latin Americans are the central themes of his vision for the Region.
As Vice President and Corporate Secretary of the World Bank Group since August 2010, Familiar played a key role in facilitating and fostering cooperation and strategic dialogue between the Board of Governors, the Boards of Executive Directors and World Bank Group Senior Management in the adoption of the new strategy for the global eradication of extreme poverty by 2030.

He has also promoted the modernization of the institution in terms of delivering services tailored to the needs of its clients, including innovative financial services, knowledge products and comprehensive solutions to development challenges. Familiar leads the relationship with 31 Latin American and Caribbean countries through a portfolio of ongoing projects, technical assistance and donations worth more than US$30 billion.

Traditionally, the Region has represented slightly above 30 percent of the International Bank for Reconstruction and Development’s (IBRD) —the Group window for medium-income countries— total lending. Previously, Familiar was the Chief Executive Officer of the Mexican Instituto del Fondo Nacional para el Consumo de los Trabajadores (Instituto FONACOT), a government owned financial institution with one million clients and a loan portfolio of US$1 billion.

It grants consumer loans to workers, guarantees their access to finance and fosters the development of financial literacy. Between 2004 and 2008 he served as Executive Director and Deputy Executive Director for the World Bank Group in Washington, DC, having been elected to represent Costa Rica, El Salvador, Guatemala, Honduras, Mexico, Nicaragua, Spain and Venezuela as its representative on the Boards of the International Bank for Reconstruction and Development, the International Finance Corporation, the International Development Association, and the Multilateral Investment Guarantee Agency.

He started his career in the Banking and Securities Commission of Mexico (CNBV, in Spanish), where he held various appointments until becoming Vice-chairman of Securities and Derivatives Markets Supervision and member of the Board of Government.
He was in charge of the design, negotiation and implementation of several pieces of regulation, including the executive’s branch proposal of the new Securities Market Law, issued by Congress on December 2005 and the proposals to amend the Securities Market Law and of a new Mutual Funds Law, both issued by Congress on June 2001.

He was a member of the Corporate Best Practices Committee at Mexico’s Coordinating Business Council (CCE) and the Accounting Principles Commission of the Mexican Institute of Public Accountants. Familiar also lectured on finance at the Autonomous Technological Institute of Mexico (ITAM) and was a member of the Advisory Board of the Accounting and Strategic Finance Program at the same university. He holds a bachelor’s degree in accounting and a master’s degree in finance from ITAM, where he graduated with honors.