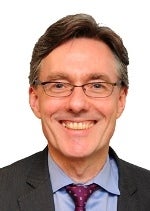 Mr. Joachim von Amsberg is currently the Vice President at the Asian Infrastructure Investment Bank (AIIB) where he is responsible for developing and implementing AIIB’s strategy and investment portfolio, as well as monitoring standards compliance and operational procedures.Prior to that, he was Vice President, Development Finance at the World Bank where was responsible for the replenishment and stewardship of the International Development Association (IDA), the World Bank’s fund for the poorest, and for trust fund and partnership operations.

As Vice President for Operations Policy and Country Services, Mr. von Amsberg oversaw the World Bank’s results agenda with its increased focus on achieving, measuring and communicating operational results and introduced the Program-for-Results lending product. He was responsible for the Bank’s operational risk functions including policies on procurement, financial management, social and environmental safeguards. He also oversaw the Bank’s modernization and reform agenda.

During his 25 years at the World Bank he served as Country Director for Indonesia and the Philippines where he spearheaded the preparation of the country strategy partnerships together with the Governments and stakeholders, and managed the World Bank operational portfolios and analytical work programs. Mr. von Amsberg has authored a number of World Bank research reports and other publications.