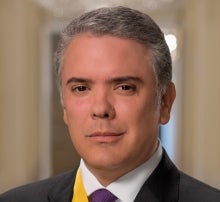 President of Colombia
Expertise on:
Governance
Featured on: October 14, 2021

Iván Duque was elected President of Colombia on June 17, 2018, for the constitutional period 2018-2022. His government program is based on Legality, Entrepreneurship, and Equity.

Iván Duque was elected President of Colombia on June 17, 2018, for the constitutional period 2018-2022. His government program is based on Legality, Entrepreneurship, and Equity.

Born in Bogotá on August 1, 1976, he is a lawyer from Sergio Arboleda University and has major studies in philosophy and humanities. He is an expert in economic issues with executive studies at Harvard. He holds two master's degrees: one from Georgetown, in Public Policy Management, and one in Economic Law from American University.

He was head of the Culture, Creativity, and Solidarity division of the Inter-American Development Bank (IDB), leading issues of social innovation, entrepreneurship, youth, and creative economy. He was a consultant to the IDB presidency and the main advisor for Colombia. He has served as a columnist and teacher.

As Senator, he carried out five laws of the Republic: the Orange Law, which promotes creative industries and culture as a motor for development; the Severance Law, which allows the use of severance payments to prepay the education of children and dependents; the Defibrillator Law, which requires the installation of resuscitators in public places and in emergency transport in Colombia; the 'B Companies' Law, which provides the conditions to create and develop Commercial Benefit and Collective Interest companies and is co-author of the Law that extended maternity leave from 14 to 18 weeks.

He is the author of the books IndignAcción, ideas for the Colombia of the Future; Monetary Sins; Machiavelli in Colombia; Orange effect; The Future is in the Center; My Father's Archeology, and Humanism Matters. Along with Felipe Buitrago, he is co-author of La Economía Naranja.

Mr. Duque has stood out in various areas of the country's current political affairs. He wrote, presented, and defended the lawsuit against the Legislative Act for Peace, before the Constitutional Court, which limited the fast track and allowed Congress to make changes in the implementation of the agreements with the Revolutionary Armed Forces of Colombia.

In 2016, he was chosen as one of the most prominent leaders in the country by Semana Magazine and the Colombia Leader Foundation. During his three years as a congressman, his colleagues and various local organizations that highlight and measure the work of Colombian legislators recognized him as the best Senator.

President Duque is married to Mrs. Maria Juliana Ruiz, and dad of Luciana, Matias and Eloisa.