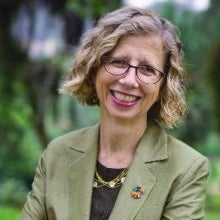 Between 2015 and 2019, Ms. Andersen was the Director-General of the International Union for Conservation of Nature (IUCN).

Between 2015 and 2019, Ms. Andersen was the Director-General of the International Union for Conservation of Nature (IUCN).

Ms. Andersen has more than 30 years of experience in international development economics, environmental sustainability, strategy and operations. She has led work on a range of issues including agriculture, environmental management, biodiversity conservation, climate change, infrastructure, energy, transport, and water resources management and hydro-diplomacy.

Between 1999 and 2014, Ms. Andersen held several leadership positions  at the World Bank including Vice President of the Middle East and North Africa; Vice President for Sustainable Development and Head of the CGIAR Fund Council.

Prior to her 15 years at the World Bank, Ms. Andersen worked 12 years at the United Nations, first on drought and desertification, beginning with the UN Sudano-Sahelian Office. In 1992, she was appointed UNDP’s Water and Environment Coordinator for the Arab Region.

Ms. Andersen holds a Bachelors from the London Metropolitan University North and a Masters in Development Economics from the School of Oriental and African Studies, University of London.

@andersen_inger
Receive updates about upcoming events!
Past Events featuring Inger Andersen
Blue Finance – Unlocking the Potential of the Blue Economy
Taking on Transport Emissions
Invest in Nature: Uncovering the Hidden Value of Biodiversity
The New Arabs: How the Millennial Generation is Changing the Middle East
Jobs vs. Privilege in the Middle East and North Africa