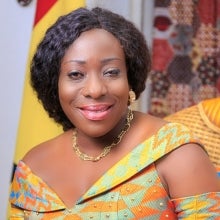 Hon. Catherine Abelema Afeku(Mrs.) was born at Axim in the Western Region. She obtained a Master of Business Administration from the Keller Graduate School of Management of DeVry University in Atlanta, Georgia in the year 2008.

Hon. Catherine Abelema Afeku(Mrs.) was born at Axim in the Western Region. She obtained a Master of Business Administration from the Keller Graduate School of Management of DeVry University in Atlanta, Georgia in the year 2008.

She is married to Mr. Seth Afeku with whom she has three children. She is a Christian, a member of the Catholic Church.

Hon. Catherine Afeku worked with the World Bank and Sitico Petroleum in Kenya as Business Development Consultant. She also worked at the Inlingua School of Languages in Brescia, Italy.

Mrs. Afeku entered Ghanaian politics in the early 2000s and became Government’s Spokesperson on Infrastructure during President Kuffour’s regime. She contested in the 2008 general elections and won as the Member of Parliament for Evalue Ajomoro, Gwira constituency on the ticket of the New Patriotic Party.

In Parliament, she first served on the Roads and Transport Committee and then as a Deputy Ranking Member of the Communications Committee. She later became a Member of the Business Committee of Parliament.  She lost her re-election bid in 2012 but came back strongly to recapture the seat in the 2016 general elections.

In January 2017, His Excellency, Nana Addo Dankwah Akuffo-Addo, President of the Republic of Ghana, appointed her as Minister for Tourism, Arts and Culture, a role she has played diligently over the last one and half years. Her dynamism, coupled with a deeper sense of appreciation of the sector has led to the initiation of many projects and programmes such as, digitization and automation of revenue collection various tourist sites i.e. Cape Coast and Elmina Castles, Wli Waterfalls, Kwame Nkrumah Memorial Park to boost revenue generation and an aggressive marketing drive to project Ghana as a preferred tourism destination through the “See Ghana” “Eat Ghana” “Wear Ghana” campaign which is currently running on Cable News Network (CNN) and other social media platforms etc.