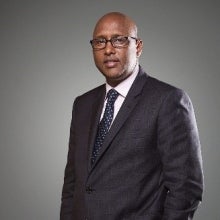 Hon. Adan Mohamed also performed various senior roles in Barclays including CEO of Barclays Kenya for over 10 years and Managing Director – Barclays East and West Africa.  He also worked in senior Finance roles in Barclays Bank Group. Prior to joining Barclays, he worked for Pricewater house Coopers (London) in the Management Consultancy and Business Advisory Services.  His international career has seen him serve in the UK, US and Africa.

He  has served in many other capacities both in private and public sector in Kenya, including:  Chairman of Kenya Bankers Association, Member of the Kenya National Economic and Social Council (NESC), and as the Council Chairman of Jomo Kenyatta University of Agriculture and Technology (JKUAT) amongst others.

He has led Kenya’s doing business climate reform program that has seen Kenya ranked one of the most reformed economies globally for three consecutive years by the World Bank Group. Under his leadership, Kenya has made an impressive improvement to rank 61st globally in 2018, up from 136th in 2014. Hon. Mohamed led the development Kenya’s Industrial Transformation Programme (KITP), Kenya’s Pioneer Trade Policy amongst other notable policies for the country. In his role as Cabinet Secretary for Trade, Industry and Cooperative’s, Hon. Adan Mohamed won the African Leadership Excellence Award in 2017 for his role in advancing Kenya as a Trade and investment hub.