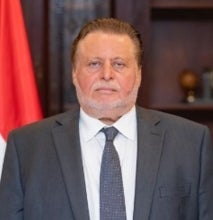 Governor of the Central Bank of Egypt
Expertise on:
Financial Sector
Featured on: October 14, 2022

Hassan Abdalla was appointed as the Governor of the Central Bank of Egypt (CBE) on August 18, 2022.

Hassan Abdalla was appointed as the Governor of the Central Bank of Egypt (CBE) on August 18, 2022.

Abdalla’s interest towards empowering youth and entrepreneurship was manifested across multiple arenas, including co-founding the Egyptian Junior Business Association (EJB) as well as serving as board member and treasurer of Endeavour Egypt.

Pursuing his passion to serve the community, he founded “We Owe it to Egypt” and served as a member of the board of directors of the Arab Educational Information Network, “Shamaa Foundation.”

Abdalla also serves as a part-time faculty member at the American University in Cairo (AUC), where he obtained both his Bachelor’s and Master’s and was awarded distinguished alumni. He holds several positions in the educational field, namely, member on the Strategy Advisory Board of the School of Business at the AUC as well as a board member of the ESLSCA Business School of Egypt.