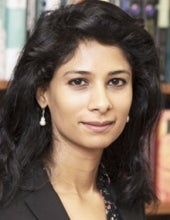 Gita Gopinath is the John Zwaanstra Professor of International Studies and of Economics at Harvard University. Her research focuses on International Finance and Macroeconomics.Read more

Gita Gopinath is the John Zwaanstra Professor of International Studies and of Economics at Harvard University. Her research focuses on International Finance and Macroeconomics. She is co-director of the International Finance and Macroeconomics program at the National Bureau of Economic Research, a visiting scholar at the Federal Reserve Bank of Boston, member of the economic advisory panel of the Federal Reserve Bank of New York, Economic Adviser to the Chief Minister of Kerala state (India), a co-editor at the American Economic Review, co-editor of the current Handbook of International Economics and was managing editor of the Review of Economic Studies. She also served as a member of the Eminent Persons Advisory Group on G-20 Matters for India's Ministry of Finance. In 2011, she was chosen as a Young Global Leader by the World Economic Forum. In 2014, she was named one of the top 25 economists under 45 by the IMF. Before coming to Harvard, she was an assistant professor of economics at the University of Chicago's Graduate School of Business. She received a PhD in economics from Princeton University, a Master' in economics from Delhi University and University of Washington, and BA in economics from Delhi University.