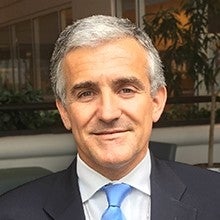 Bousquet brings several years of leadership experience on resilience and reconstruction issues. Most recently as director in the Middle East and North Africa (MENA) region, Bousquet led the Bank’s engagement with international partners during a period of unprecedented volatility in the region. In response to the Syrian refugee crisis, he worked with the United Nations, multilateral development banks, and bilateral partners to create the Global Concessional Financing Facility, an international effort to bridge the gap in humanitarian and development assistance by providing concessional financing to middle-income countries facing refugee crises. With an initial focus on helping Jordan and Lebanon address the influx of Syrian refugees, the Facility has expanded to the global level to ensure there is a coordinated international response to future refugee crises in middle-income countries worldwide.

Bousquet also served as MENA’s senior regional advisor, where he led the Bank’s reconstruction efforts in a number of countries, including in Gaza in 2014. Prior to this, he held  several roles in MENA focused on resilience to shocks and broader fragility challenges, including as Sector Manager of the Urban and Social Development Sectors and as Regional Coordinator for Disaster Risk Management (2011-2014).

Before joining MENA, Bousquet worked for seven years across a range of sectors and fragile and conflict-affected states in Africa, including as program coordinator for Central and Western Africa in the Water and Urban Unit, and as acting sector leader for the Sustainable Development Department for the Republic of Congo and Democratic Republic of Congo (DRC). In the DRC, he managed projects that underpinned the country’s response to the financial crisis of 2008.

Prior to joining the Bank, Bousquet held roles in the public and private sectors focused on water utilities, transport, and finance and capital markets. He holds an MBA from Columbia Business School and a graduate diploma in engineering from the National Engineering School of Public Works in Lyon.