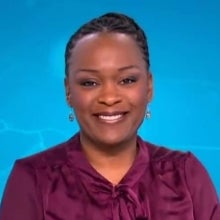 Dominique Tchimbakala was born in 1977 in the Paris region and was educated in France until primary school.Read more

Dominique Tchimbakala was born in 1977 in the Paris region and was educated in France until primary school. In 1987, she moved with her family to the Republic of Congo and was educated at the French high school Saint-Exupéry (Brazzaville), where she passed her baccalaureate.

After returning to France in 1994, she integrated preparatory class letters in preparation for the competition courses Ecole Normale Supérieure (ENS). After a bachelor's degree in History and a master's degree in Political Science at the University of Paris X-Nanterre, she finished her academic studies with a postgraduate Management Media to Com-Sciences Audencia (Nantes). She became an Alumni of the famous French business school HEC PARIS after completing an Executive MBA between 2019 and 2021.

Dominique made her debut in journalism by collaborating with local Nantes media before moving to the Center for Training and Development of Journalists in Paris (CFPJ). After several collaborations, she joined the editorial staff of France 2, where she produced reports for the channel's newspapers (1 p.m., 8 p.m., Télématin and Edition de la Nuit).

Since 2000, Dominique has worked for several editorial staff in France (France 2, Le Magazine de la santé sur France 5, BFMTV, Jeune Afrique…. ). In 2017, she became one of the titular presenters of the Journal Afrique on the francophone channel TV5Monde. In 2018, she became the President of the Board of Directors of the Association des Anciens des Lycées Francais du Monde (Union-ALFM).

Dominique grew up in an international environment with French and Congolese cultures, fueled by numerous travels. French is her native language, she is also fluent in English, Spanish and can understand and speak several Congolese languages.

Dominique is the eldest of a family of 5 children and the mother of 2.