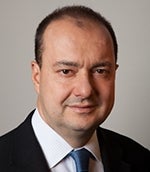 A Greek national, Mr. Tsitsiragos became Vice President in July 2011. Prior to this, he was Director of the Middle East, North Africa, and Southern Europe department at IFC, where he developed a new strategy to support the region’s private sector in the wake of the Arab Spring. This included the creation of the E4E Initiative for Arab Youth, which brings together public and private providers of education and private companies to improve the quality of education in the region.