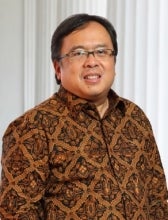 Bambang is one of Indonesia’s leading economists, with a Bachelors Degree in Economic Development and Regional Economy from the University of Indonesia (1990), and a Masters Degree (1995) and PhD (1997) in Urban and Regional Planning from the University of Illinois, USA. His areas of expertise include regional economics, fiscal decentralisation, public finance, development economics, urban economics and transportation.

Prior to his ministerial positions, Bambang’s career included Commisioner roles with PT Pertamina (a national Oil & Gas company); PT Aneka Tambang (a State-owned mining company); PT Adira Insurance; and PT PLN (the national electricity company). He is active on a number of international boards including the ASEAN Infrastructure Fund and the ASEAN+3 Finance and Central Bank Deputies Meeting.