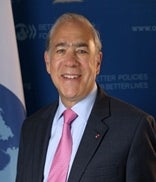 Born on May 8th, 1950, in Tampico, Mexico, Angel Gurría came to the OECD following a distinguished career in public service, including two ministerial posts.

Born on May 8th, 1950, in Tampico, Mexico, Angel Gurría came to the OECD following a distinguished career in public service, including two ministerial posts.

As Mexico’s Minister of Foreign Affairs from December 1994 to January 1998, he made dialogue and consensus-building one of the hallmarks of his approach to global issues. From January 1998 to December 2000, he was Mexico’s Minister of Finance and Public Credit. For the first time in a generation, he steered Mexico’s economy through a change of Administration without a recurrence of the financial crises that had previously dogged such changes.

As OECD Secretary-General, since June 2006, he has reinforced the OECD's role as a ‘hub” for global dialogue and debate on economic policy issues while pursuing internal modernisation and reform. Under his leadership, the OECD has expanded its membership to include Chile, Estonia, Israel and Slovenia and opened accession talks with Russia. It has also strengthened its links with other major emerging economies, including Brazil, China, India, Indonesia and South Africa, with a view to possible membership. The OECD is now an active participant in both the G-8 and the G-20 Summit processes. Mr. Gurría has also reinforced the impact of OECD work in several domains, and has steered the launching of high profile initiatives, including several strategies in the domain of Innovation, Green Growth, Gender, Development and Skills. He also launched the "New Approaches to Economic Challenges", an OECD reflection process on the lessons from the crisis with the aim to upgrade OECD’s analytical frameworks and develop a comprehensive agenda for sustainable and inclusive growth.

A regular contributor to some of the world’s leading newspapers and journals, Mr. Gurría has received several awards and decorations from more than 25 countries, including the titles of Grand officier de la Légion d’honneur and Chevalier dans l’ordre du Mérite agricole, awarded by the French Government. He has received Honorary Degrees from the Universities of Leeds,

Haifa and Bratislava. In 2007, Mr. Gurría was the first recipient of the Globalist of the Year Award of the Canadian International Council to honour his efforts as a global citizen to promote trans-nationalism, inclusiveness and a global consciousness. Most recently, he was distinguished by the President of Korea with the Gwangwha Medal for Diplomatic Service. He also received a recognition to his longstanding contribution to the development of public administration in Mexico, the Medalla al Mérito Administrativo Internacional “Gustavo Martínez Cabañas”, awarded by the Instituto Nacional de Administración Pública (INAP), and in 2013 was awarded the Medalla Rectoral from the University of Chile.

Mr. Gurría is married to Dr. Lulu Quintana, a distinguished ophthalmologist, and they have three adult children.