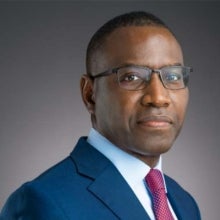 Until his appointment as Minister of Economy, Planning and Cooperation in Senegal in April 2019, Mr.Read more

Until his appointment as Minister of Economy, Planning and Cooperation in Senegal in April 2019, Mr. Amadou Hott was the Vice President of the African Development Bank’s Power, Energy, Green Growth and Climate Change Complex, since November 2016, and has 20 years of experience in areas such as structured finance, sovereign wealth funds management, investment banking, infrastructure and the development of integrated energy solutions.

Prior to joining the African Development Bank, Amadou held various Investment banking and Investment advisory positions in New York, London, Dubai and Lagos. He was Director of Millennium Finance Corporation for Africa, where he was responsible for project finance operations in sectors such as energy, mining, ICT and banking in Africa and Middle East. He was also Managing Director of UBA Capital, which is present in 20 African countries, and then founder and managing Director of Afribridge Capital, an investment firm specializing in advisory services in Africa where he provided advice in the areas of energy, electricity, information, communications and technology.

In 2012, after 15 years of international investment banking and advisory work, Amadou returned to Senegal to serve his country. His roles in Senegal included: Special Advisor of HE President Macky Sall, Chairman of Aéroport Internationale Blaise Diagne (Senegal’s new international airport) and Founder and CEO of Senegal’s Sovereign Wealth Fund, as part of which he launched major infrastructure investment initiatives, including renewable energy and energy projects.

Amadou has undergraduate degrees in applied mathematics and economy, an MSc in Finance, from Sorbonne University in Paris, which included participation as an exchange student in New York University’s MSc in Financial Mathematics program. He was named a Young Global Leader by the World Economic Forum in 2012.