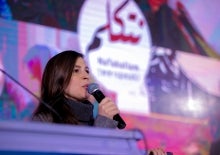 Aline Sara is the co-founder and CEO of NaTakallam, a social enterprise that connects refugees and displaced persons with work opportunities in the language sector through the freelance economy.
Read more >

Aline Sara is the co-founder and CEO of NaTakallam, a social enterprise that connects refugees and displaced persons with work opportunities in the language sector through the freelance economy.

Lebanese, born and raised in New York, Aline completed her Baccalaureate at the Lycée Français in New York City and graduated in psychology from Tufts University in Boston. She then moved to Beirut and worked in conflict resolution and human rights before transitioning into journalism, focusing on human and women’s rights and wider sociopolitical affairs before, during, and after the Arab Uprisings.

In 2012, Aline returned to New York for her master’s in international affairs at Columbia University. She then worked as an international election observer in Tunisia, Guyana and Haiti while continuing to write as a freelancer on the side. In 2015, in light of the challenging work situation for the million+ Syrian refugees in Lebanon, and while searching for ways to practice her own Arabic skills, Aline came up with the idea for NaTakallam --to hire refugees as online tutors-- which has grown into a larger social enterprise working in multiple languages and communities.

To date, the venture, which is disrupting the way we typically think of humanitarianism/international development, has provided over half $600,000 in cash to over 150 displaced people worldwide. Besides income to refugees on the one hand and a service to students and clients on the other, NaTakallam helps foster intercultural exchange and raise awareness around the daily challenges of fleeing conflict zones, notably through its academic partnerships with schools and universities (including Columbia, Duke, GW, Tufts, Yale and more).

Brief description of NaTakallam
NaTakallam offers high-quality, curated language services delivered by refugees and displaced persons through the gig economy.
These services include translation, online language teaching and tutoring, as well as cultural exchange sessions. NaTakallam provide refugees with the training and mentorship needed to perform the services, which offer a pathway to sustainable income during and after displacement and/or in the early stages of resettlement. On the other hand, NaTakallam provides clients with a much-needed service.
To date, displaced persons have self-generated over $600,000 to over 150 refugees through NaTakallam, connecting with over 6000 unique users in 90+ countries.  Institutional partners and clients include universities such as Tufts, Duke, Columbia, and Georgetown, organizations such as the International Rescue Committee, and private sector clients such as Ben & Jerry's, WeWork, and Buzzfeed. While originally born to support Syrians teaching Arabic, NaTakallam's language sessions are now also
offered in French (with refugees from Congo DRC, Burundi, Guinea), Persian (with Iranians and Afghans) and Spanish (with Venezuelans and Central Americans).