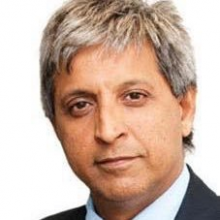 Vice-Chancellor and Principal, University of the Witwatersrand
Latest or upcoming appearance: December 3, 2018

Before joining Wits, Habib was Deputy Vice-Chancellor at the University of Johannesburg and, before that, he served as the Executive Director of the Democracy and Governance Programme of the Human Science Research Council.Read more

Before joining Wits, Habib was Deputy Vice-Chancellor at the University of Johannesburg and, before that, he served as the Executive Director of the Democracy and Governance Programme of the Human Science Research Council. He also served as the founding director of the Centre for Civil Society, as a research professor in the School of Development Studies at the University of KwaZulu-Natal, and has held academic appointments at the Universities of Durban-Westville and KwaZulu-Natal and the Human Science Research Council.

Prof. Habib has published numerous edited books, book chapters and journal articles over the last two decades in the thematic areas of democratisation and its consolidation in South Africa, contemporary social movements, philanthropy, giving and its impact on poverty alleviation and development, institutional reform, changing identities and their evolution in the post-apartheid era, and South Africa’s role in Africa and beyond. He is a well-known public figure in South Africa whose opinions are often sought by both the print and broadcasting media. His latest book is entitled: South Africa’s Suspended Revolution: Hopes and Prospects.

In October 2006, Habib was apprehended and deported at JFK airport whilst attempting to visit the US with colleagues from South Africa's Human Sciences Research Council.  The itinerary for his visit included appointments at the National Institutes of Health, the Centers for Disease Control, and the World Bank.  The following month, Habib learned that his wife and two children were also barred from the US.  The US Government informed Habib the following year that his inadmissibility was due to “links of terrorism”.  With support from the ACLU, Habib appealed the decision and, in January 2010, the State Department lifted the ban.