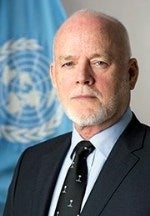 On 13 June 2016, the United Nations General Assembly elected Ambassador Peter Thomson of Fiji to serve as President of its seventy-first session, which runs from September 2016 to September 2017. Ambassador Thomson took office in New York as Fiji’s Permanent Representative to the United Nations in February 2010, serving concurrently as Fiji’s Ambassador to Cuba until assumption of his duties as President of the UN General Assembly’s seventy-first session.Read more

Between 1972 and 1987, he was a civil servant in the Government of Fiji working in the fields of rural development and then foreign affairs. His Fiji government career began as a district officer in the rural regions of Navua, Macuata and Taveuni. In 1978, he joined the Ministry of Foreign Affairs in Suva, where he took on political and overseas development assistance responsibilities before being seconded to the Pacific Islands Forum Secretariat in 1979.

He was posted to Tokyo in 1981 with the responsibility of opening the Embassy of Fiji in Japan. He remained in Tokyo thereafter as First Secretary (Economic) until 1984, when he was appointed Consul-General of Fiji in Sydney.
In 1986, he returned to Fiji to become Permanent Secretary of Information, first under the leadership of Prime Minister Ratu Sir Kamisese Mara, and then under Prime Minister Dr. Timoci Bavadra. In May 1987, he was appointed Permanent Secretary to the Governor-General, Ratu Sir Penaia Ganilau, a position he held until his resignation from the civil service following the second military coup d’etat of 1987.

Ambassador Thomson has served as a board member of the Fiji Visitors Bureau, Fiji TV and the Fiji Broadcasting Commission. From 1988 to 2009, he worked in private enterprise as a company director, an investment consultant and a management consultant specializing in Pacific affairs, with clients ranging from government agencies to regional organizations, banks, universities and investment corporations. Ambassador Thomson is a founding member of the executive committees of the Australia-Fiji Business Council and the New Zealand-Fiji Business Council and in 2007 was made a life member of the latter.
He was born in Suva, Fiji in 1948 and was educated at Suva Grammar School and Natabua High School in Fiji. In 1966-1967, he attended the International Centre at Sevenoaks School in the United Kingdom. A graduate in political studies (Auckland University, New Zealand) and development studies (Cambridge University, United Kingdom), Ambassador Thomson has had a lifelong involvement in the field of development.

He is a published author, with one of his books, Kava in the Blood, being the winner of a Montana Book Award for non-fiction. In 2014, he was made an Officer of the Order of Fiji, an award bestowed by the President of Fiji recognizing contributions and achievements by Fijians to the nation.