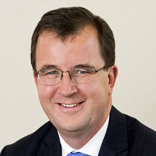 As Managing Director and World Bank Group Chief Financial Officer, Bertrand Badré is responsible for the financial and risk management strategies of the World Bank Group and for the institutions that make up the Group. This includes development of new, innovative financial products and services, oversight of the financial reporting, and mobilization of financial resources in alignment with the Group’s strategy. Mr.Read more >

Between 2004 and 2007, Mr. Badré was Managing Director of Lazard in Paris responsible for the Financial Services Group. In 2003, he was invited to join President Chirac’s diplomatic team and was closely involved in the preparation of the G8 summit in Evian. In that capacity, he served as the President’s deputy personal representative for Africa and as a spokesman for the working group on new international financial contributions to fight poverty and fund development, which produced The Landau Report. In 2002, he was a member of the World Panel on Financing Water Infrastructure chaired by Michel Camdessus, a panel of financial experts to assess ways of attracting resources to the water field.

In 1999 Mr. Badré joined Lazard, where he spent 18 months as Assistant Director in London, before transferring to New York as Director in the mergers & acquisitions department with specific focus on the financial services sector. From 1995 to 1999, he served in the French Ministry of Finance where he led a number of control, audit and consultancy missions for the French National Audit Office. During this period, he was seconded to the World Bank in Togo to support the Ministry of Agriculture on budget matters. He began his career in 1989 as Assistant Group Controller for BFI-Ibexsa, a Franco-American company that is now part of Avnet.

Mr. Badré has served as Director on a number of boards, including the Supervisory Board of Eurazeo between 2010 and 2012, Haulotte Group since 2005, various boards of the leading French regional daily Newspaper Group Ouest France, and represented Crédit Agricole and Sociéte Générale on the board of a number of their subsidiaries.

Mr. Badré is a graduate of ENA (Ecole Nationale d'Administration) and Institut d'Etudes Politiques de Paris. He also studied history at Paris IV University (La Sorbonne), and graduated from HEC (Hautes Études Commerciales in Paris) business school. He is married to Vanessa and they have four children.